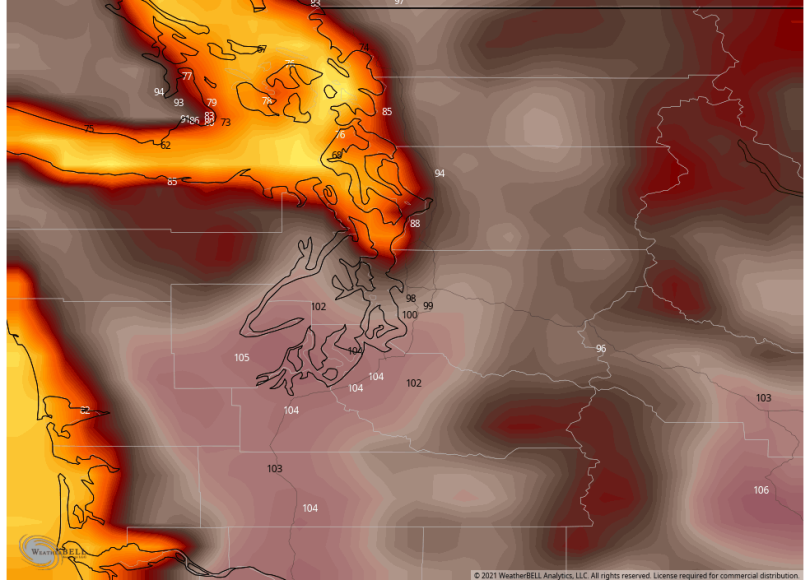 An extraordinary heat wave will build over the Pacific Northwest and British Columbia this weekend, bringing some of the warmest recorded temperatures in the history of the region. The upper-level forecast for Saturday evening shows an extraordinary “heat dome” ridge centered over western North America.

Temperatures under the ridge are expected to easily be above anything in the 1979-2009 climatology period.

The 850 hPa temperature (approximately the height of Paradise on Mt. Rainier) will be above the climatological max over most of Washington and BC.

The above charts are computed using a 3-week window centered at the forecast date, so it doesn’t tell us anything about how this heat wave might rank on an all-time basis. For that, we can look at a climatology of 850 hPa temperatures from weather balloon launches on the western Washington coast, which is comprised of observations dating back to 1948.

The red line shows the daily record 850 hPa temperature, which has only exceeded 25 C on one instance, in early September. June has never exceeded 23 C.

The forecast ECMWF ensemble mean at the sounding location (KUIL — Quillayute) is currently 25 C on the nose for the 00 UTC balloon launch on Sunday evening, although some of the operational forecast runs have suggested that 26-28 C is within the realm of possibilities.

So the large-scale pattern and upper-air temperatures support the potential for monthly as well as all-time record highs Saturday-Sunday-Monday timeframe in some locations. Preparations to protect populations vulnerable to extreme heat should already be underway.

How hot will it get?

Temperature forecasting in a region of mountains and bodies of water is already tricky, but it is especially difficult during an extreme event in early summer following a period of appreciable rainfall. The added evapotranspiration from our lush June foliage will send dew points soaring to around 60 (GFS — image below) and potentially up to the mid-60s if you believe the more extreme ECMWF model (not pictured).

Dew points above 60 F add several degrees to the apparent temperature, as measured by the heat index. For example, a 98 F air temperature with a 62 F dew point results in a heat index of 101 F.

Many portions of the west do not have the luxury of moist soil from recent rainfall, particularly east of the Cascades. Much of the lower Columbia basin is in extreme drought, which will only make things worse and increase the chance that all-time temperature records could fall in the Tri-Cities area (potentially 112 F or higher).

Some of the Seattle metropolitan area will also benefit from the cold waters of Puget Sound. The sea surface temperature of Puget Sound is around 60 F right now, so on a hot, sunny day there will be a pressure gradient between the Sound and nearby land.

Compared with a flat location like Florida, Puget Sound sea breezes are often negated by other wind patterns related to the proximity of mountains and the Pacific Ocean. But with a giant ridge overhead suppressing larger-scale winds, there will be the potential for local-scale circulations to dominate more than usual.

Many of Seattle’s hottest days are characterized by easterly winds, which not only negates the influence of Puget Sound but also adds further warming via downsloping from the Cascades. So the wind speed and direction will be critical in determining which areas receive the warmest temperatures.

A quick comparison of ECMWF vs. GFS temperature forecasts for Saturday evening reveals this forecasting challenge. Both models show a sharp temperature gradient along Puget Sound with the warmest temperatures in the south Sound. Even the higher-resolution (9 km horizontal) ECMWF is not capable of resolving many of these fine-scale gradients.

The forecast for Sunday is especially difficult. The ECMWF surface wind streamlines at 11 AM Sunday morning show a hot, easterly flow over the Cascades and south Sound, while westerly flow dominates over the north Sound.

By 5 PM, the model has a somewhat cooler northwesterly flow over central Sound, but it is a relatively weak wind that will have a limited influence on areas away from the water.

That leaves us with several questions that are unlikely to be resolved until we get more high-resolution model guidance later this week. Are the global models correctly resolving these small-scale wind patterns? And even if the models are correct, will these relatively light winds be enough to push cooler air inland in the Seattle area? Or will locations such as our official sensor at Sea-Tac airport be far enough inland to reach 95-100 degrees on Sunday? Additionally, minor adjustments to the forecast strength and location of the large-scale ridge will surely make a difference.

What we can say for sure is that a significant heat wave is coming and the main question is: How many temperature records will be broken and by how much?