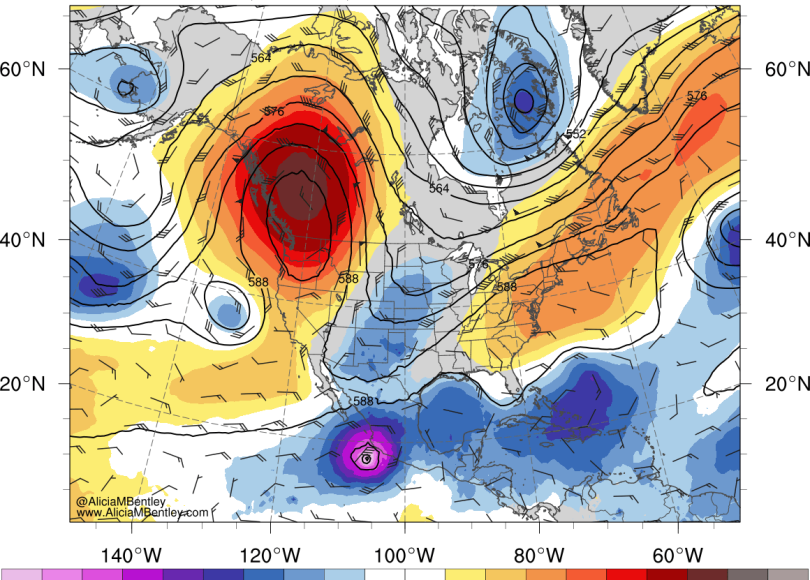 The enormity of what the Pacific Northwest just experienced is difficult to put into words, but it is essential to at least attempt to contextualize what we just experienced and try to answer the #1 burning question on everyone’s mind — what role is climate change playing in PNW heat waves?

First of all, it is indisputable that summertime temperatures are increasing in the PNW and the number of hot days (e.g. 90+°F) is increasing in most places. Even so, the June 2021 heat wave was truly on another scale, beyond the limits of what many of us thought was possible in coastal portions of the Pacific Northwest.

In this post, I review some of the significant historical records from the recent heat wave, examine the relationship between climate change and increasing summer high temperatures in the PNW, and outline some meteorological reasons why the June 2021 heat wave was unique and why it (hopefully) will not be repeated in the near future, even as the frequency and intensity of heat waves continues to increase across the globe.

How anomalous was this heat wave?

The most anomalous record of all was probably the 110° reading at Quillayute, Washington, which was 11°F above the previous all-time record.

Out of 5,401 weather stations in the US and Canada, not a single other station has as big of a gap between the #1 and #2 temperature records.

The temperatures were so high in many places that they would have smashed all-time climate records at most locations in the US. Portland’s new record of 116°F exceeds all-time records in most of Texas and New Mexico.

Canada’s new all-time temperature record of 49.6°C/121°F at Lytton BC has only ever been matched at the warmest spots in the desert southwest. To make matters worse, a wildfire tragically destroyed most of the town a few days after the record.

There were so many other significant weather occurrences related to the heat that the best I can do is list them below. Under normal circumstances, each of these might have been worthy of an entire blog post on its own.

To sum it all up, this heat wave fundamentally altered our understanding of what type of temperature extremes are even possible in the Pacific Northwest in the current climate. It also makes one wonder what is possible in future, warmer climates. If 116 is possible in Portland after +1 °C of global warming, will even greater extremes be possible at +2 or +3 °C? Or was this a one-off “black swan” heat wave that is unlikely to be repeated in the future?

Wildfires, in comparison, are a more complicated extreme that are more difficult to direct attribute to climate change, mostly because other human-caused factors like land use management, firefighting, and urban sprawl are also important.

The impact of climate change on extreme heat events can be simply visualized by shifting the distribution of temperatures to the right, which leads to more hot weather and extreme heat.

The shift to the right can already be seen in real temperature data such as Seattle’s summertime high temperatures which are running 2°F warmer in the 21st Century compared to the 20th Century.

Seattle’s summer high temperatures are influenced somewhat by the urban heat island effect and the expansion of Sea-Tac airport, but also simply by being away from the Pacific Ocean. Still, the number of 75+°F days is clearly increasing at the expense of cooler days, as would be expected from shifting a distribution to the right.

Following the approach of Durran (2020), extreme events can be probabilistically attributed to climate change with fairly high confidence. And the more extreme the event, the more confident you can be about attributing it to climate change.

The (somewhat) good news is that the curve fitting approach suggests that an event this extreme will still be relatively rare as long as the amount of global warming stays modest. But — and this is a very important caveat — it does not account changes to the shape of the temperature distribution in the future. Some recent studies, such as one by Lucas Vargas Zeppetello at UW, suggest that increased drought will lead to a disproportionate increase in peak summer temperatures relative to the average.

If we apply the same curve-fitting approach at Quillayute, WA, which is close to the Pacific Ocean and surrounded by trees, there is much less of a climate signal in average summer high temperatures to date.

The two distributions are basically the same, except for the ~60% increase in 90°F+ days in the last two decades. Which certainly could be a result of a change in temperature variability, even if the mean has not changed.

As for the 110°F reading at Quillayute, it is so insanely outside of the bounds of historical summer high temperatures (6 standard deviations) that it’s hard to make any definitive statement about whether we’ll see 110° again at Quillayute in the near future.

What we can more confidently say is that as of 2021, climate change is increasing average summer temperatures in the western US and that the extremes are generally getting warmer roughly in proportion with the increase in the mean. Climatologist Brian Brettschneider put together a nice map showing the increase in 99th percentile summer high temperatures, which is increasing in most places except the Midwest (a result of irrigated agriculture).

Irrigation from the Columbia River Project is also responsible for somewhat reducing the increase in summer temperatures in eastern Washington, although the irrigation started around 1950 so it is not captured by the above map.

What’s important here is that context matters — especially in a place like the Pacific Northwest that has complex terrain and a variety of microclimates.

From a meteorological perspective, the key to making sense of the heat wave is by looking at the enormous upper-level ridge, commonly referred to as a “heat dome” because of how the pressure surfaces in the upper atmosphere are altered by a circular-shaped ridge of high pressure.

The massive size, extent, and duration of the ridge resulted in air that was originally over the Pacific Ocean taking a week-long trajectory through British Columbia, where it was heated over terrain and then rapidly descended and warmed as it approached the western Washington directly from the east.

Most importantly, the approach of the airmass from the east prevented the cool, marine air over the Pacific from appreciably reducing the extent and intensity of the heat in coastal WA and OR.

In comparison, trajectories from Seattle’s previous top heat wave, July 27-29, 2009, show a much shorter trajectory over land and an approach from the north-northeast. In that event, Qulllayute failed to reach 90°F despite a high of 103°F in Seattle.

So the size and extent of the ridge was undoubtedly the key to getting up to 110°F at Quillayute, not only holding off the marine push but also adding additional heating through easterly downslope warming.

Are PNW ridges increasing in intensity?

To contextualize the recent record-breaking ridge, I downloaded a 50+ year record of summer upper-air data at Quillayute. The height of the 500 hPa pressure level (which is proportional to the average temperature of the lower atmosphere) broke an all-time record at Quillayute during the heat wave.

Fortunately, the recent event appears to be more of a blip than a trend, at least so far. The maximum and 95th percentile ridges are essentially unchanged through the 50-year record.

However, the 850 hPa temperature (approx. 5,000 ft elevation) does have a warming trend consistent with climate change (+ 1 °C since the 1980s). The recent 2021 event is unprecedented to an absurd extent.

The 95th percentile 850 hPa temperature events (18.5°C or greater) are increasing at a rapid pace.

It’s not surprising that the “curve fitting” approach does show warming at 850 hPa (5,000 ft above the ground) at Quillayute during the summer, even if it isn’t showing up in surface high temperatures.

So what are we seeing here? Why is Quillayute not seeing more extreme high temperatures in the summer, even though it is warming aloft and nearby places like Seattle are seeing considerable warming?

The answer likely has to do with the cool, marine air that is constantly lurking just offshore, even on our warmest summer days. Because the land gets hotter than the ocean during the summer months, a pressure differential is created between the PNW and the Pacific Ocean. As illustrated in an article by Scott Sistek, there is always a tendency for marine air to push inland on warm summer days, although it usually takes until the overnight hours to reach the Seattle area.

As the climate warms the land faster than the ocean, it follows that the onshore pressure gradient should increase and marine pushes will continue to offset heat waves. I think this is what we are already seeing in the historical data at Quillayute. In the absence of a mega-ridge like the one we just experienced, coastal Washington will probably not experience another 110°F day.

How much will marine pushes offset PNW heatwaves as the planet continues to warm?

The role of marine pushes in offsetting heatwaves is an important research topic that deserves further scrutiny through the use of high-resolution regional climate models and idealized experiments. Some of these are already underway, as Cliff Mass has described in his recent blog post.

I’ll leave it to the reader to weigh the arguments and decide their own perspective on the climate change – 2021 heat wave connections, but it does appear that the underlying meteorology of the recent heat wave was unique and unlikely to be repeated in the PNW in the near future.

What I have tried to emphasize in this post is that every future heat wave will be slightly worse because of climate change. And the cumulative effect of that slight increase in temperature, combined with other human-caused changes to the environment, is how significant crises like repeated record wildfire seasons are created. So even if the geography of the PNW helps mitigate heat waves to some extent, there are plenty of other climate-related crises to contend with.