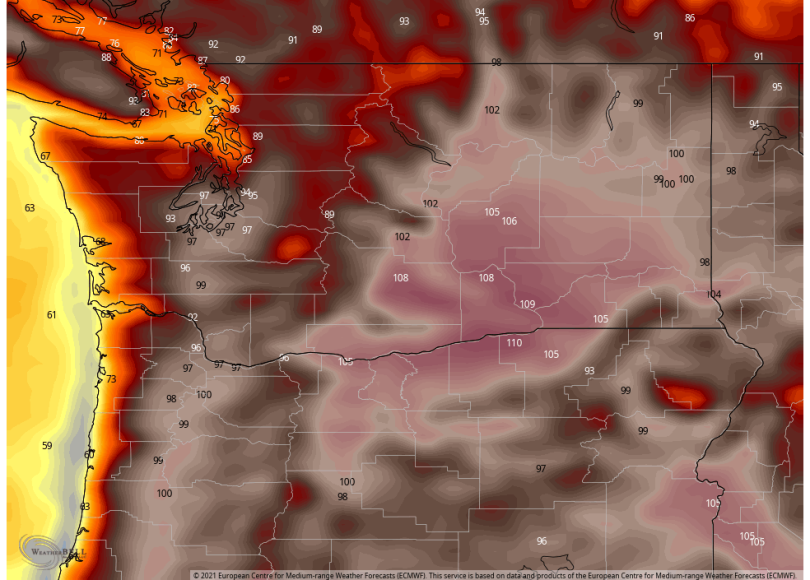 A ridge that has been building offshore will move into the PNW and British Columbia this week, bringing a short-lived but potent heatwave to the region from Thursday – Saturday.

The upper-air 500 hPa anomaly forecast for Thursday evening shows a large 2-sigma ridge centered along Pacific Coast, which is a significant but fortunately short-lived feature.

Early August is the warmest time of the year in the PNW so it doesn’t take extreme anomalies to deliver temperatures in the upper-90s to 100s. Seattle will have no problem reaching the mid-to-upper 90s on Friday while Portland is expected to surpass 100 on both Thursday and Friday.

Because of the transient nature of the ridge, the airmass will not have time to stagnate and heat up over land. Trajectories for Thursday evening show the airmass approaching from the northwest, which is far different from the June heatwave which featured reversed, easterly flow over the Cascades.

In fact, there will be enough onshore flow that coastal areas will avoid the worst of the heatwave altogether. The warmest day on the WA/OR coast will be Thursday, with temperatures reaching only the low-80s in Hoquiam and 70s in Astoria.

On Friday, the onshore flow will be even stronger.

Looking at the latest ECMWF ensemble for Seattle, low 90s are likely on Thursday with mid-to-upper-90s on Friday. A few ensemble members have 100+°F on Friday, but fortunately it looks like Sea-Tac will mostly likely stay in the 90s.

Will smoke be an issue?

Fortunately, last weekend’s storm system cleared away the large plume of smoke from California, there is no impending wall of smoke to block out the sun. By Friday, the NASA smoke model shows the largest plume of smoke remaining across northern CA/southern OR. Smoke from fires in central Washington/southern BC may find their way west of the Cascades, as upper-level winds will be largely stagnant from Thursday night into Friday with the ridge directly overhead.

The main fire to watch for local smoke impacts is the Schneider Springs fire to the west of Yakima. I recommend following the Washington Smoke Blog to keep up-to-date on the latest wildfire developments.

It does appear that the smoke plume from California will pass through the PNW on Saturday-Sunday, but I suspect the smoke will remain aloft for the most part and it should move out entirely by the end of the weekend.

Relief by next week

To end on an optimistic note, the weather pattern will quickly reverse itself by early next week, with the ridging expected to continue eastward and a deep trough expected to take over in the PNW.

Cool and cloudy temperatures with rain showers are likely by Monday and especially Tuesday. Looking farther ahead, the jet stream is currently expected to flatten out and become more zonal by the end of next week, which should hopefully lead to an onshore flow regime with seasonal temperatures.