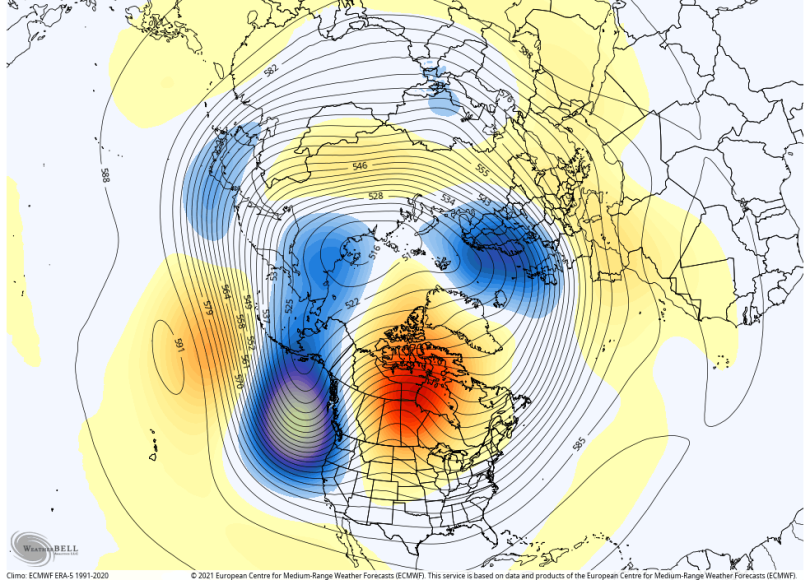 The Pacific Northwest is known for a quick transition from summer to autumn, but this year it’s starting to feel like we skipped autumn and went straight to winter.

The first snowfall of the season has been observed in the mountains, with a few inches of additional snowfall expected this week.

Over the past 30 days, average temperatures are running around 2°F below normal across most of Washington and Oregon.

In addition to the cooler weather, rainfall has been above double the average in western Washington (and Oregon). Unfortunately, conditions have remained dry in the lee of the Cascades, especially central Washington.

Continued cool and wet weather for the remainder of October

Last week, the extratropical transition of Hurricane Sam in the North Atlantic set up a blocking pattern over eastern Canada that is expected to remain in place for the next few weeks.

The ECMWF ensemble mean 500 hPa heights for the next week (Oct 12-19) show a ridge centered north of Quebec flanked by two troughs. Most relevant to our region is continued troughing over BC and the Gulf of Alaska as well.

Adding to the fun, the tight height contours over the North Pacific indicate the development of a strong jet stream which signals the beginning of a stormy period in the PNW. By next Monday, the GFS shows a busy North Pacific, although the “waviness” of the jet stream suggests it will take some time for these storms to make their way to the PNW, perhaps by the following weekend (Oct 25-26).

The ECMWF ensemble 24-hour precipitation members for Sea-Tac show significant uncertainty. The ensemble members have yet to reach consensus on a potentially significant storm this weekend, much less any future action the following week. Although generally all indications are that wet weather will return after only a brief respite during the middle of next week.

Over the following week (Oct 20-27), it appears that the longwave pattern will retrograde, meaning the large ridge over Canada will shift a bit westward and the adjacent trough will shift offshore over the NE Pacific.

This pattern would be great news for California, as the trough looks to be deep enough allow precipitation to reach the Sierra Nevada and finally put an end to dry season.

The PNW will likely see periods of rain and continued below-normal temperatures through this period.

Looking farther ahead to the winter, NOAA is continuing to predict La Niña conditions, meaning the general cool/wet pattern will likely dominate, especially as we move into 2022.